If you’re in need of a new water softener, it’s easy to get lost in the dozens of options you can find online or in your local hardware store. One of the brands you’re likely to come across during your search is Kinetico. If you’re interested in purchasing a Kinetico water softener, you’ve come to the right place. Below, we’ve provided a thorough review that explains everything you need to know about the product.

What is the Kinetico Water Softener and How Does It Work?

Kinetico water softeners can be an excellent choice for those searching for safe, clean drinking water. Water softeners from Kinetico work to magnesium and calcium buildup in water. This, in turn, softens the water, making it more suitable for bathing and drinking. The company offers a wide variety of softeners to meet any commercial or residential needs. Options include:

Additionally, customers also have the opportunity to install various components of a water softening system. For example, the customer can consider installing a Kinetico K5 Drinking Water Station, Sulfur Guard Backwashing Filter, and Dechlorinator. Although our review will focus primarily on the complete water softener units, it’s nice to know that customers can install individual components if they so desire.

The Kinetico Premier Series is the company’s best-selling water softener. The company says that these softeners are best-suited for homes with challenging water conditions. “Consumer’s Digest” has given this water softener series a “Best Buy” label because it offers customers exceptional value and performance. You can find more about the Premier Series product specifications here.

Kinetico says that customers who tend to use more water than most and who may have larger pipes should consider its’ Premier Series. The softener can help ensure that customers still receive both soft water and generous flow rates throughout the entire home. The product has a high hardness removal rating, able to remove more than 225 grains of hardness.

The product also contains a high capacity, as it can regenerate ions up to three times per day, thus allowing it to remove up to 200,000 grains per day. This water softener works well with either well or city water. However, what makes this product unique is the fact that it does not run on electricity. Instead, its’ power source is moving water. This can help keep costs low and operation comfortable.

Also, the product also comes with a unique XP feature, a Kinetico design that is patent-pending. Essentially, this feature allows users to calibrate their water softener to match their system directly. Not only does this help make the product more efficient, but it also provides tremendous waste reduction and cost savings as well. Kinetico describes it as having a softener that’s “custom-fit to your home.”

The Kinetico Signature Series is another durable water softener option. Much like the Premier Series, this softener too operates on running water. This can make operation a breeze, as you will not have to worry about setting or adjusting timers. Additionally, you will not have to worry about replacing or repairing any electrical components that may burn out. Once installed, the softener is good to go.

The Kinetico Signature Series water softener features a twin-tank design, which helps ensure the water stays in circulation. The product also relies upon soft water regeneration. Instead of relying on hard water for restoration, Signature Series water softeners use soft water, which can help ensure that your system works well for more extended periods.

The Signature Series differs from the Premier Series in two significant ways. For one, the unit does not work well with city water which is typically harder than well water. Those who rely on a municipal water source must pay careful attention to the water softener they choose. Additionally, the Signature Series does not come with the patent-pending XP design. You can read more about the design specs here. 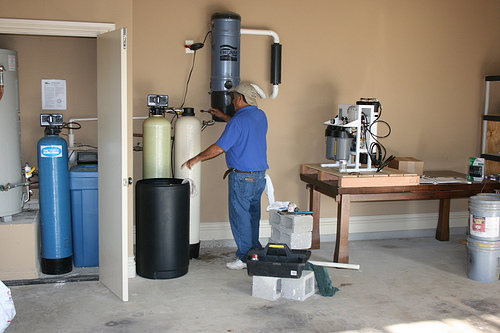 The Essential Series also separates itself from other water softeners because of another patent-pending design from Kinetico, the AccuDial. This feature is similar to the XP feature in the Premier Series, in that it is designed explicitly to allow the softener to act as a customized unit. Thanks to the AccuDial, the Essential Series is an incredibly efficient water softener.

Unfortunately, there does not appear to be information on Kinetico’s website indicating how much their products cost. When a customer wishes to purchase a unit, the company directs them to a “Get a Free Quote” form. Here, potential customers can enter their contact information so that a water expert in their area can visit your home and provide you with a more accurate price estimate.

Additionally, the Kinetico website specifies that they do not sell to the public directly. The site stresses the fact that potential customers much reach out to their local Kinetico technician specialist to purchase the product. This also is the case if you were ever to need to buy replacement parts for your Kinetico product. You cannot buy anything from the Kinetico website directly.

Generally speaking, customers can expect basic water softeners, such as the Essential Series, to cost a few hundred dollars. Again, this cost will depend tremendously on your home and your expected water flow. As water softeners increase in quality, so too does their price. Premium water softeners can cost upwards of a few thousand dollars.

Lastly, all Kinetico water softeners come with a Limited Manufacturer’s Warranty. Kinetico covers their workmanship for five years, which is an exceptional warranty. However, it’s worth noting that the warranty does not include any labor or freight charges. So, while the parts of your device are under warranty, you’ll likely have to pay a small fee to have them replaced.

Online reviews of Kinetico water softeners tend to be favorable. For instance, on the website Consumer Affairs, Kinetico has a 4.6-star rating based on more than 500 reviews. Of those who reviewed the company and products, more than 400 gave it a five-star review, while less than 20 people gave a one-star review.

One thing that stood out while reading online reviews was how knowledgeable Kinetico technicians were. Because customers cannot purchase from the Kinetico website directly, it’s understandable if there were a bit skeptical having to rely upon their trusted local technicians. But many reviews stressed that Kinetico-trained experts were understanding, reliable, knowledgeable, and trustworthy.

Remember though that this is only applicable to the twin-tank Kinetico models. This does not apply to the Essential Series, which is a single-tank design. Furthermore, Kinetico softeners are an “upflow” softener, while Culligan systems are not. This could mean that a softener from Kinetico could be more efficient and thorough than a Culligan system.

If you plan to be in your home for a while, you may want to consider the additional lifespan that you’d receive with a Kinetico model. However, if you do not plan to live in your home for a long time, the up-front cost will outweigh the longevity benefits. In these situations, you may find yourself better off choosing a water softener from Culligan.

Lastly, you’ll need to call a Culligan technician in addition to a Kinetico technician. Often, technicians do not sell both. This means you’ll need to get price quotes from both. Remember that both technicians will want to sell you their products, so you should receive objective information from both and then make a determination as to the best softener for your home.

If you have long struggled with “hard” water, it may be worth your while to switch to a water softener from Kinetico. Although the price depends on your home, you can expect to pay more for a Kinetico system that you would other water systems. However, this is a cost that you could find fell worth your while and could end up saving you money in the long run.

First and foremost, we appreciate the fact that Kinetico softeners do not run on electricity. Because Kinetico systems run from the energy from moving water, which means they do not need a power source. Not only does this cut down on your electricity bill, but it also offers incredible convenience as well, as you don’t have to worry about setting timers or checking your softener.

Additionally, we have heard many good things about Kinetico technicians. Customer reviews indicate that these technicians do an excellent job explaining the problems with your existing water system and how a Kinetico system can improve it. They do so by measuring how many impurities are in your water and letting you know the results you would see if you replaced your system.

Lastly, we like the fact that there are multiple Kinetico systems from which you can choose. You can select the method that meets your budget and your home’s water needs. Some may find the Premier Series to be too expensive, but others may find it an investment that’s well worth their while. With a five-year manufacturer’s warranty, the system should be guaranteed to last for a while.

Right now, you can access a “Free Water Test” on Kinetico’s website. Kinetico works in conjunction with local water experts to make this happen. To complete a test form on Kinetico's website, you’ll need to provide information such as your name, email address, phone number, and address. Once you’ve completed the form, a local water expert will contact you in less than a day.