The Best Under Sink Water Filters in 2018
Reviews & Buying Guides

Mostly because of the chlorine, but the bigger issue is you never really know if there’s been some kind of problem down at the treatment plant.

Today we’re going to show you the best under sink filters.

Considerations for Choosing the Best Under Sink Water Filter

The flipside of having so many great options is having to choose between them. We’re here to help. We’ve taken a look at what the market has on offer and chosen the five best under sink water filters for you. But what do you need to know before choosing one?

All the filter systems we show here strains the water in differing numbers of stages. Usually the greater the number of stages, the better, but it’s not always the case. One thing to keep in mind — an increased number of stages can increase the cost of the system and the replacement purifiers.

This is how long your new filtration system will go before you need to replace the filters, usually measured in gallons. Higher is often better, but if it’s too high, you’ll need to look at the bacteriostatic element in the filtration process. Why? Because sitting there for months and even years on end, things tend to grow a little funky.

Most under sink water filter systems come with a dedicated faucet. By using a dedicated faucet instead of hooking into your main faucet, you’re conserving h2o and saving money. Instead of purifiying every drop of liquid you run through your faucet (cooking water, washing the hands, water for plants, doing the dishes) you’re filtering only the water you plan on consuming.

Alright, we took a good hard look at what is available in the marketplace and came up with a handful of choices that we think would make sense to pick up. Here they are in no particular order. 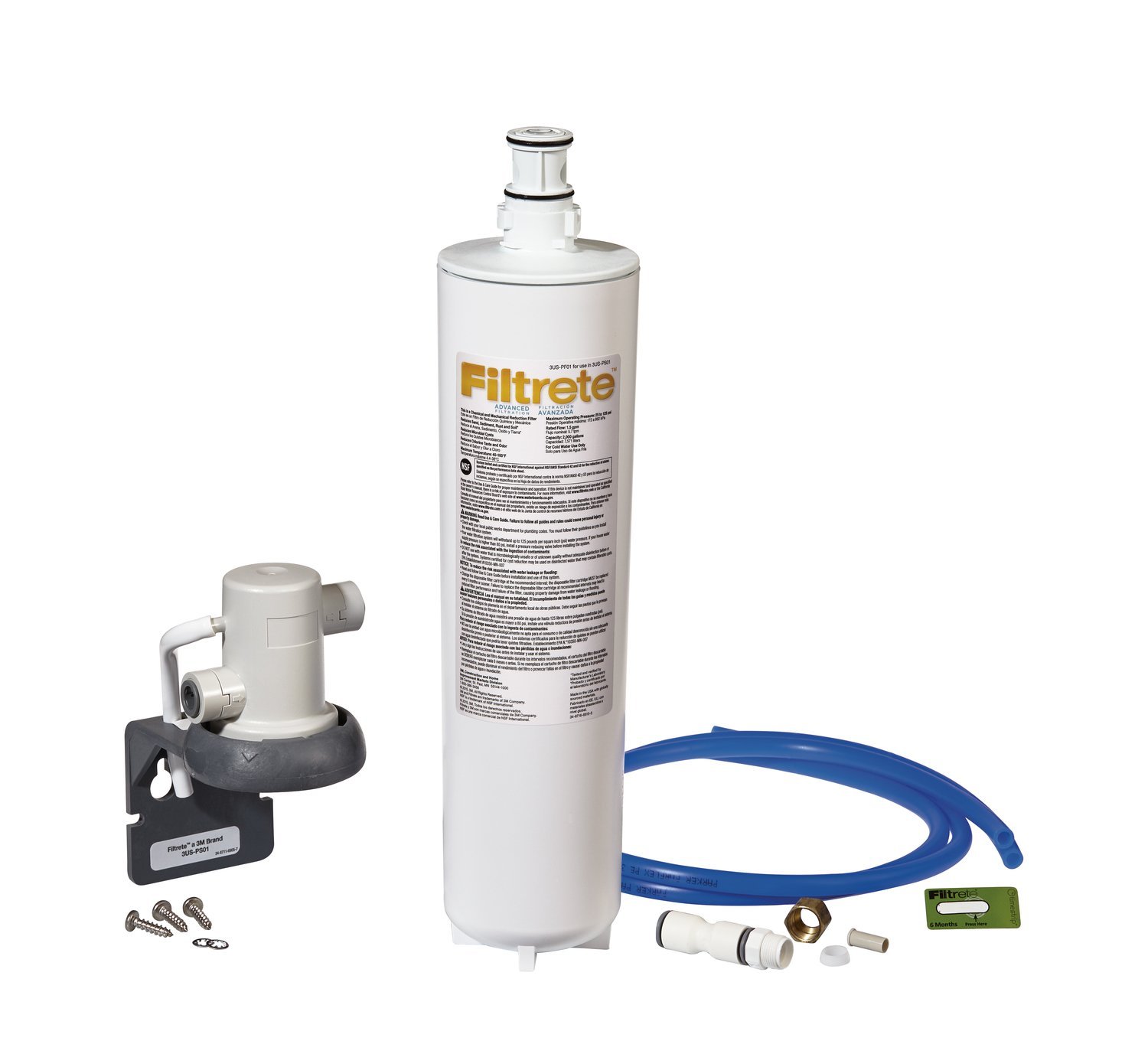 3M is a big corporation and their water filtration systems are well regarded. The 3US-PS01 is a simple affair: it just plugs into your water line. The good — NSF tested and certified to reduce chlorine taste and smell as well as cysts. It will also reduce sand, silt, rust, and other chunky things. It’s also one of the cheapest models on this list.

The bad — It doesn’t filter out a lot of more advanced things like heavy metals: arsenic, lead, etc. It has no dedicated faucet, so you will be using it for pretty much everything, including washing your hands and watering the plants. You can set up a dedicated faucet if you want, but that will raise the cost.

Best for: Someone looking for a way to cut the smell and taste of the chlorine in their water and not much else. 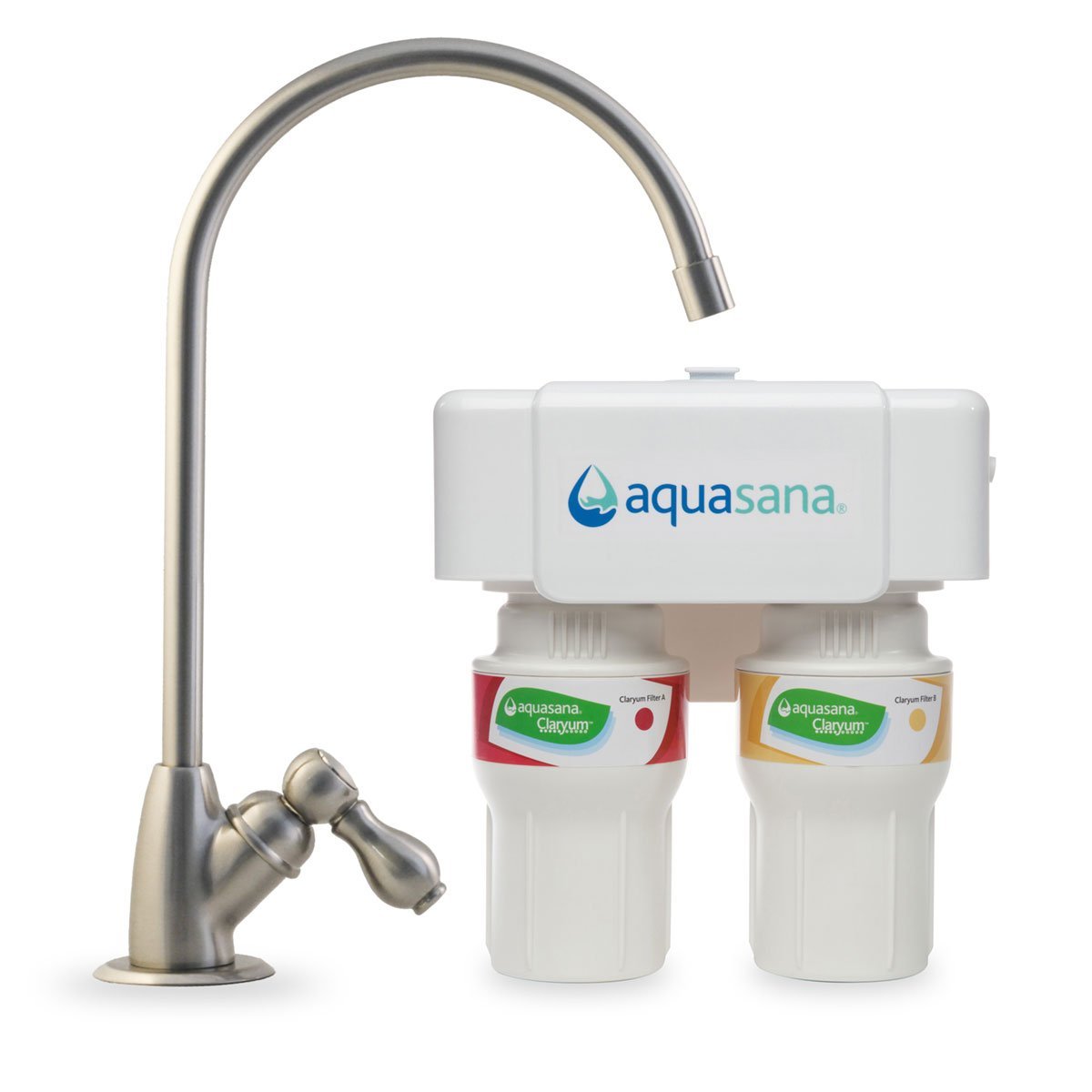 The Aquasana 2-Stage is a pretty good system. The price is reasonable, although a set of replacement filters are just 20 bucks less than the entire system.

Speaking of the purifiers, they’ve got a fancy name: Claryum. See, they kinda used “clarity” and then spelled it funny? Well, it ticks a lot of the boxes: NSF certified, activated carbon to knock down organic chemicals, catalytic carbon to get rid of chlorine, ion-exchange for the lead and mercury, and a sub-micron mechanical filter to grab onto asbestos and parasites.

And the best part? The beneficial minerals you and your family need in your bodies are left untouched.

Best for: Someone looking for a low-cost system that does a fantastic job without much fuss. 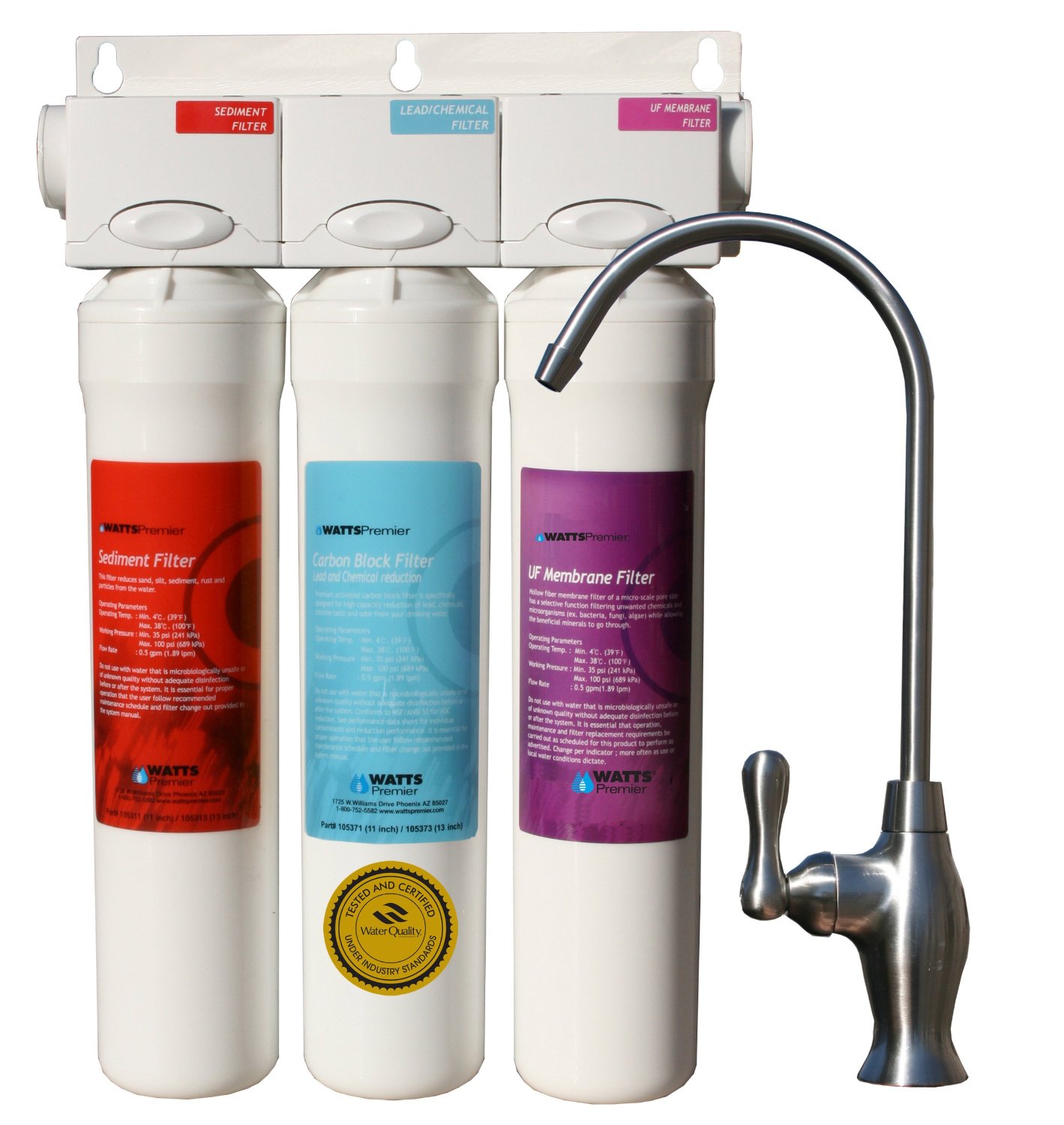 The Watts 3-Stage Filtration System goes like this: the first stage gets out the big chunks: silt, rust, dirt, etc. The second stage is a carbon block and it takes care of a lot of the other things: VOCs, lead, herbicides, and pesticides. Also gets rid of the nasty chlorine smell and taste. The final stage is a hollow membrane that catches everything down to the .02 micron level. Which means everything else except viruses.

The stage one and two purifiers need to be changed every six months and the third stage filter needs to be changed out every year. Annual cost: a little under a hundred bucks.

Best for﻿﻿: the person wishing to get finely filtered water at a good price. 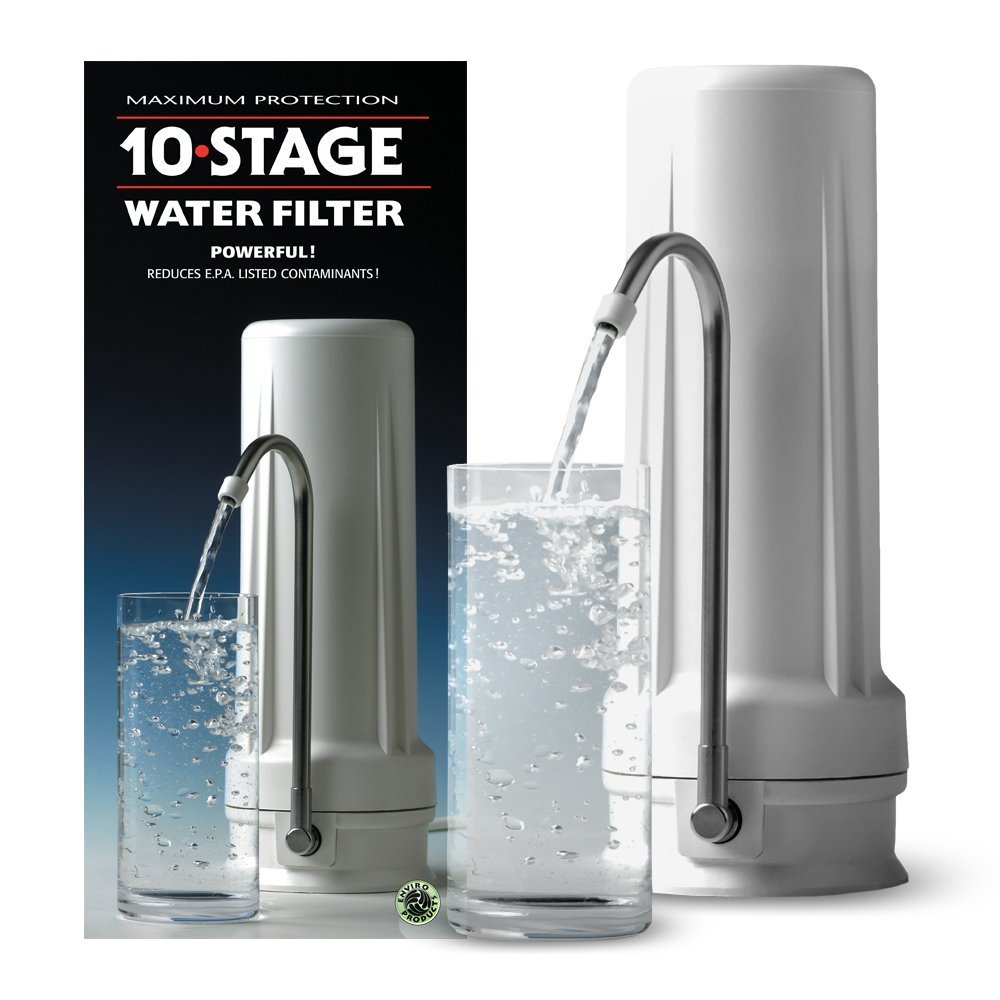 Don’t feel like drilling a big hole and installing a dedicated faucet head for your filtration system? The New Wave might be for you.

It’ll filter out pretty much everything while leaving the good minerals behind for you. The New Wave uses what they call a 10 stage filtration system to do so and does a good job. Although there is only one purifier unit, they have constructed it in such a manner so that the liquid passes through ten different levels of filtration inside that one filter.

For having so many stages, the strainer itself isn’t much larger than the two-stage Aquasana. I know, size isn’t everything. But you’ve also got that big chunk of plastic on the counter. If you don’t like the funky chunk of white plastic sitting on your kitchen counter, there are kits available to shove it under your sink.

Best for: Someone enamored with 10 stage filtration and no extra room under their kitchen sink. 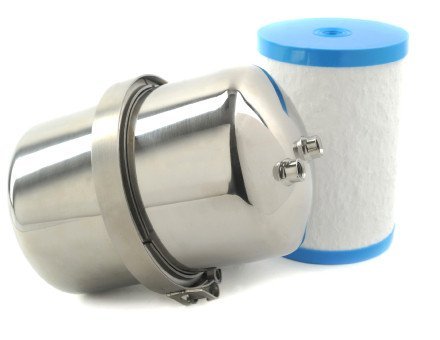 The Multipure Aquaversa is a big unit. It’s a carbon block filtration system, NSF certified, and also certified by the State of California (fairly stringent). The replacement filter runs about 75 bucks or so which is similar to other units on this list. You can also run a t-line off of it to an icemaker or other appliance.

What sets the Aquaversa apart? Honestly, the price. You could get a Watts three-stage system, which is the next most expensive one on the list, and three years of replacement purifiers for the price of the Aquaversa.

Sure, the Aquaversa is stainless steel. But unless you really need that stainless steel, or the California certification, or a t-line (and most other systems could likely do the same) then you’d probably be better off looking elsewhere. Like at any other thing on this list.

Oh, and the dedicated faucet? Not included.

Best for: a person looking to spend the most money they can on a carbon block water filtration system, or someone who really needs State of California certification.

So, Which one is Our Favorite?

What do we think is the best?

We’d highly recommend the Watts Premier 531130 Filter-Pure UF-3 3-Stage Water Filtration System. The three stages do a better job than anything else on the list, it comes with a faucet, and it doesn’t break the bank. Second place would go to the Aquasana. It performs similarly well, but we prefer three stages instead of two.

A final note — we didn’t include reverse osmosis systems here for a couple reasons. They take up a gigantic amount of space, they’re just as expensive as the systems listed here, they produce a lot of waste water in addition to the clean h2o, and the water they produce is stripped of important minerals and flavor. While there are appropriate applications for a reverse osmosis system, they are outside the scope of this article.

Now go and get that Watts 3-stage system.