Looking for a filter that can remove up to 99% of contaminants from your drinking water? The Aquagear Water Filter Pitcher claims to do just that, but is it worth the price? This article breaks down every aspect of the pitcher to help you make the best buying decision.

There are dozens of water pitchers that filter your drinking water on the market. They aren’t new, but their filtering ability is increasing. With a surge of new pitchers flooding the market, you might be wondering how you can choose the best model; one that lives up to its claims.

Aquagear’s pitcher is a popular option online, appearing in almost any search for a pitcher filter. Does it live up to all the hype, though? We decided to place this product under the microscope and find out. Here’s everything you need to know about the Aquagear Water Filter Pitcher from the contaminants it removes to how it stacks up against the competition.

What Is the Aquagear Water Filter Pitcher and How Does It Work?

The Aquagear Water Filter Pitcher is precisely what its name suggests, a pitcher that filters water. Companies like Brita and PUR have had their models on the market for years, but there has been a recent trend of higher quality models from manufacturers who focus on creating filters capable of removing even more contaminants.

What’s the difference? Before this trend, companies couldn’t claim to be able to remove chemicals like chlorine and fluoride. Now, filters are using better carbon to remove dozens of contaminants found in everyday tap water.

Aquagear’s model meets NSF standards while utilizing safe plastic to create a crisp, clean water drinking experience. Like previous pitchers on the market, it fills up from the top while water is filtered down into the plastic container. You can store it in your fridge or leave it on the counter to enjoy healthier water every time you want a drink.
What Makes the Aquagear Water Filter Pitcher Unique?

The uniqueness of any water filter is measured by its function and filtration ability. When it comes to Aquagear Water Filter Pitcher, here’s what helps the model stand out. 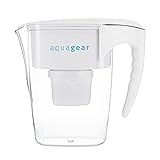 Aquagear employs a single filter in their pitcher, which contains activated carbon from coconut shells and minerals that create an ion-exchange. Both of these elements are essential to removing harmful chemicals from your drinking water.

Each filter is 100% recyclable, too. Every package comes with a USPS return mailing bag to make the process easy. By emailing Aquagear, you can even receive free postage.
When it comes to lifespan, each filter can handle 150 gallons of water. That’s roughly six months, but the quality of your water supply could lengthen or shorten the timeframe. At some point, the carbon’s micro holes fill up with contaminants, which means it’s time to replace the filter. 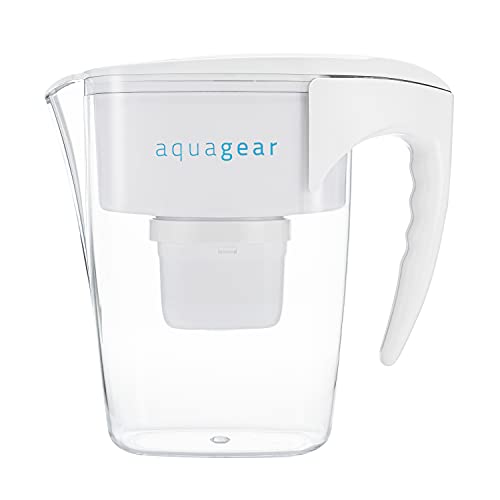 Having healthy, filtered water contaminated by a chemical pitcher is a shame. That’s why the Aquagear Water Filter Pitcher uses BPA-free plastic. It is entirely recyclable, and FDA approved food grade quality. Plus, the design is simple to use.

With the filter in place, the pitcher holds a half-gallon of water. The top compartment can hold about a cup and a half of water at a time, taking eight cups total to fill the entire pitcher. All in all, it takes about five minutes to fill your Aquagear the whole way.

One of the unique factors of any pitcher is the contaminants it removes. Every model is different, which makes it vital to look at the filter’s capabilities before making a final purchase. When it comes to the Aquagear Water Filter Pitcher, here’s a partial list of what the filter is capable of:

These statistics aren’t made up by the company, either. The Aquagear Water Filter Pitcher has over fifteen years of testing, meeting industry standards set by the NSF (The Public Health and Safety Organization). The pitcher passes the health effects and aesthetic effects of the organization’s standards on drinking water treatment units (#42 and #53).

There, however, some contaminants that the Aquagear filter is unable to remove. Like most filters on the market, this model is not meant to be used with untreated water. Only gravity filters, distillers, and reverse osmosis systems can do so.

The Aquagear is meant to be used with a public water supply, like the taps in your home, or disinfected well water. Untreated water contains microbiological pollutants ranging from bacteria to viruses, which require special filtration to remove.

Finally, and this is important, the carbon-based filter does not remove healthy minerals from your water supply. Calcium, magnesium, and potassium are just a few examples of the healthier things found in tap water.

Depending on the seller, you can find the Aquagear Water Filter Pitcher from just under $70 to over $100. Both the manufacturer and Amazon sell the pitcher for $69.95, however. So, there’s no need to pay any more than that.

The increased prices we found are from sellers on eBay. With shipping offers and other discounts, it makes the most sense to buy this product straight from Aquagear.

The second cost to consider is the price of the filters. Individually, each filter costs $49.95. You can save 20% on future purchases through Aquagear’s website by signing up for their subscription service, though, bringing your cost down to $39.96 per filter. The service delivers a new one every six months.

Every filter sold through Aquafilter sees a portion of its cost go to the installation of bio-sand water filters in other countries. The company commits to providing six months of clean water to those need for every purchase made. So, the cost comes with an added benefit.

Overall, public perception of the Aquagear Water Filter Pitcher is exceptionally positive. Individual reviews from customers teeter around four or four and a half stars. There are several pros and cons mentioned on various sites and blogs.

First, reviewers noted the effectiveness of the filter. Several mentioned taking theirs on vacation to places like the beach, saying their filtered water tasted as if it was just poured from a spring. The crisp, clean taste is something that nearly everyone agrees on.

The filter itself works fast, putting similar models to shame. In around five minutes, you can fill the entire half-gallon pitcher. Other customers pointed out that six months is a fair assessment of any given filter’s lifespan.

Aquagear’s warranty was another positive mark for the pitcher. The company provides a lifetime guarantee with each purchase, exchanging any individual part that wears down or breaks. You can also try the pitcher for 30 days with a full refund (including postage) if you aren’t satisfied with the product.

The first and most popular con mentioned is the filter’s price tag. It exceeds the cost of similar products in its category. Others said that there is no indicator notifying the owner when the filter needs replaced.

Finally, many mentioned that the flow of water slows down over time. This happens on purpose, however. As the porous holes in the carbon trap contaminants, the water has less room to flow through the filter. Once it settles at a light trickle, you know the filter has trapped all that it can.

There are dozens of water filtering pitchers on the market. Alexapure and Clearly Filtered are two of Aquagear’s largest competitors on the market. So, it helps to see how they stack up before deciding on which one might the best option.

Both the Aquagear and Alexapure are relatively the same across the board. The plastic pitchers are made from BPA-free, food grade plastic, and they remove similar percentages of contaminants. Each holds eight cups of water, and their filters are created from similar materials.

The Aquagear model’s filter lasts longer than the Alexapure’s, which is only capable of filtering 80 gallons of water instead of 150. The Alexapure isn’t certified by the NSF, either, though its independent studies do show similar filtering capabilities. It also happens to be less expensive.

Clearly Filtered’s pitcher separates itself from the Aquagear off the bat with higher quality, medical grade plastic instead of food grade. It passes both the 42 and 53 NSF standards, as well as 401 (Emerging Compounds/Incidental Contaminants). This pitcher does so by employing reverse osmosis. With this extra standard, the pitcher also filters:

Clearly Filtered’s model also removes a few microorganisms like E. coli, giardia, and cryptosporidium by up to 99%. Both companies’ filters last about six months, and each holds the same amount of water. The last place these two products differ in is the price.

The Aquagear is cost almost $10 more than the Clearly Filtered, but their replacement filters are the same price. Instead of a 20% subscription saving, you can purchase the Clearly Filtered version in three-packs or six-packs. The bundle of three saves $9.85, while the bundle of six saves $29.70. While the pitcher itself is cheaper, the replacement filters end up being more expensive.

After extensive review, we rate the Aquagear Water Filter Pitcher a 4.5 out of 5. It might not be the absolute best pitcher on the market, but it sure comes close. Here’s how we decided on our rating.

For starters, the construction is solid. Not only is this pitcher made well, but it incorporates a safe plastic that cannot contaminate your water with BPA or soil the taste. The design is ergonomic, and refilling it is a breeze.

An enormous portion of our rating is comprised of the filter’s ability to remove contaminants from your water supply. The pitcher is not designed to work with untreated water, but those types of products are often found in a different market. When it comes to treated water, however, the Aquagear does an incredible job of removing over 90% of major contaminants (most up to 99%).

The Clearly Filtered pitcher does have the Aquagear beat regarding what it can remove from your water and the use of medical grade plastic. Those are two places we think Aquagear could improve on, especially since it has a higher price tag.

Even though the Aquagear’s filter doesn’t match Clearly Filtered’s ability, it remains a better option than the vast majority on the market including Brita, Soma, and PUR. When compared to other pitchers in its category, like the Alexapure, Aquagear comes out ahead with its ability to meet NSF standards.

With a quick Google search, you can find numerous deals offered by coupon sites across the internet. We always advise caution when visiting these websites, as some are fraudulent. Steer clear of sites that ask you to enter any information for a coupon. We did find several legit sites offering up to 25% off, though.

From time to time, Aquagear offers savings and discounts through their website in the form of codes. You can apply these to your items at checkout, helping you save a certain percentage. Some codes are also useful for free shipping, though the site currently offers free shipping with a pitcher purchase.

Honey, a free coupon code browser extension, is another excellent way to find additional discounts. It saves you the time of hunting through coupon sites, applying them directly to your order before checkout. It also keeps an eye on price drops, which means you can have it monitor this filter while you weigh the pros and cons of other models.

As a participant in the Amazon Services LLC Associates Program, this site may earn from qualifying purchases. We may also earn commissions on purchases from other retail websites.