The Ecosmart Tankless Water Heater is one of the largest and most energy-efficient units on the market. It is available in different sizes and has some impressive features. Its compact size makes it easier to install than tradition tank units but doesn’t affect its performance. There are several pros and cons to this unit.

What is the Ecosmart Tankless Water Heater and How Does it Work?

The Ecosmart Tankless Water Heater is one of the most powerful tankless water heaters on the market. It has been available for several years and has become popular with homeowners. Most people are used to using traditional water tanks in their homes and don’t put much thought into changing them.

This tankless water heater changes everything. It works by heating the water as users need it as opposed to traditional hot water tanks that heat the water ahead of time and store it in the tanks. They have to use additional energy to keep the stored water hot until someone uses it.

These units work differently. They don’t use any energy to heat the water until the water is needed. When the hot water is turned on to wash dishes, take a shower, or for any other reason, the water travels through a flow sensor. Users can control how much water flows through at a time to have more control over their energy usage.

The sensor signals for the electric element to start heating the water. As the water flows through the heat exchanger, it heats up. The heat exchanger adjusts to keep up with the amount of water being used, so the temperature stays consistent. The hot water travels from the unit to the faucet or appliance that needs it.

This specific water heater comes in the form of a compact white unit with a black control system. Inside the box are all the sensors and electrical components that heat the water. A dial on the outside of the box allows the user to control the temperature. The water heater is small so that it can be installed on a wall, under a cabinet, or even behind a door. It connects to the plumbing and plugs into the home’s electrical system.

Tankless water heaters are more energy-efficient than traditional tanks and also much smaller. The only water that is heated is the water that is needed at the time. That means no wasted energy. That is just one of the reasons tankless hot water tanks have become so popular. Anyone who cares about energy usage or has gone green will appreciate the efficiency of this device.

A unique aspect of this product is its size. Most of us think of water heaters as big tanks that need a closet or hidden area. They are ugly eyesores that just don’t belong in plain sight. The tankless water heater is much smaller and less noticeable. There is no need to find a specific storage space; it just attaches to the plumbing and functions the same as a larger hot water tank. It produces plenty of hot water when you need it. On average, it can heat three gallons of hot water per minute. On colder days, or in colder areas, it may be necessary to pause between showers if you want to keep the water warm. Colder water takes longer to heat so the average output may be affected by lower water temperatures. Another unique aspect of the water heater is that homeowners can control the temperature. Temperature can be increased or decreased one degree at a time. The water heater does operate on a 220 amp service, so homeowners who do not already have this amp service installed may need to do so before purchasing this product. Since the unit can be mounted almost anywhere, if you have a 220 outlet somewhere in your home, chances are you can install the unit there instead of installing a new outlet elsewhere. Standout Features of this tankless water heater include, 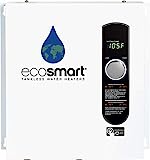 The Ecosmart Tankless Water Heater is an affordable option for several reasons. The equipment itself is similar in price to a tank water heater, but it is much smaller. It’s also easy for homeowners to install on their own, which means no installation fees. It may require some minor plumbing knowledge, but the installation instructions are clear, and the process is relatively simple. The water heater is available in different sizes. Depending on your needs, you can expect to pay between $200 and $500 for it. The real affordability comes in the form of efficiency and energy use. The water heater has a 99 percent efficiency rating. That is enough to save you up to 50% off your current energy bill. Despite the high-efficiency rating though, the water heater is not Energy Star qualified. Due to the energy savings, most people have found that the water heater pays for itself in a short period.

Since the Ecosmart has been on the market for several years now, there are plenty of user reviews online. Most people are raving about that impressive energy efficiency rating. Owners are also impressed with the overall performance of such a small unit. Many are in disbelief that the Ecosmart can heat water better and faster than their traditional tank units.

One owner explained that she had owned her Ecosmart unit for several months and had already saved hundreds of dollars on her energy bills. She also revealed that the tank works better than her older, 50-gallon tank that she removed before installing the Ecosmart unit.

It seems that many people were happy about the lifetime warranty offered with the unit. Several people wrote in their reviews that some of the parts had gone bad over time, but they were able to order the new parts at no cost due to the warranty. Of course, they still had to pay to have those parts installed on the unit, but the money they saved on the replacement parts covered the cost of labor in most cases. Some people did have warranty issues when electric or plumbing problems damaged the pieces.

When it comes to installation, users offered mixed reviews on the difficulty level. Some people were relieved that there were clear directions that allowed them to install the unit themselves. One user explained that he saved hundreds of dollars on installation costs. He admitted that he struggled with some aspects of the installation while doing it himself, but was also quick to say that the installation guide was a big help.

A common complaint of many customers was loose connections. Many people complained that they were either hard to tighten initially, became loose over time, or popped off completely, causing a major mess. A few people even mentioned that they found puddles and mold around connections that they didn’t realize were loose and leaking. 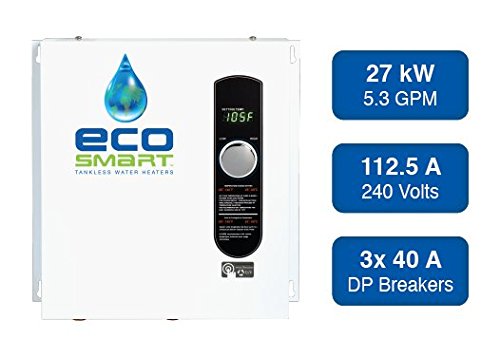 Some tankless water heaters are point-of-use heaters. That means they are connected directly to the appliance or faucet that they will heat. Some people may prefer these types of heaters, but the Ecosmart is far more convenient as a whole-home unit. Only one Ecosmart unit needs to be installed in the home, and it heats the water for various appliances or water output points.

The digital control panel is another thing that few other units offer. It’s much easier to use than a push-button unit, and it looks nicer too. The sleek design also makes it less noticeable than other similar tankless water heaters. It can be hidden easily and blends in well with other electrical outlets and device.

Another thing that sets the Ecosmart apart from other tankless water heaters on the market is the fact that it can heat numerous water sources at the same time. It can run up to four showers and a sink at simultaneously. That means no more fighting over hot water in the morning.

Ecosmart is a big name in the tankless water tank industry. They offer some of the most efficient and affordable units on the market.  They have excellent customer service, and they seem to take pride in their products.

Their units may have mixed reviews, but for the most part, they seem to perform well. The energy efficiency has been mentioned several times, and there’s no doubt that it is a notable feature and selling point for these units. Everyone wants to save money and for many people, energy bills are their most significant monthly expenses. If a small unit can bring 50% savings, why not give it a try?

A lot of people are put off by the initial cost of the unit and even intimidated at the thought of installing it themselves. It’s important to look at the unit as an investment and understand that it can pay for itself in a short period. While it is designed for owners to install themselves, that doesn’t mean you have to do it. If you aren’t comfortable with the installation process, you always have the option to call a professional.

It performs better than most people expect. It’s easy to look at this small unit and get the impression that it won’t be able to heat as well or as much water as a large tank unit. After a couple of months of using it though, it becomes clear that it’s a powerful little water heater. Most people are beyond impressed with the performance after owning it for just a short time.

It’s great for large families and people with more than one bathroom. It can keep up with busy lifestyles and the fact that it can heat water for several different sources at a time is very convenient. It is essential for buyers to choose the right size for their home as there are several options available. Buyers also have the option of selecting one unit that can heat water for the entire house or multiple tankless heaters that they can install throughout the home.

Coupons, discounts, and special offers are often available from Ecosmart for their tankless hot water units. You can sign up for email offers and check their website for sales events. Many of the stores that sell these units also offer specials and deals. You may also want to check Groupon and other coupon websites regularly to see if they are offering any special coupons that could help save you money on these units.